Denial—There are eight MONTHS till my project is due. I can work on this, that, and the other first.

Anger—Where did my muse go? WHY won’t this go together the way I want?

Bargaining— If you will cook dinner and take care of the laundry for me for the next few days, I will be able to blow through this, no problem.

Depression—Oh, how am I going to be able to face everyone and say I failed. It looks awful, I could have done better!

Acceptance—Put on the coffee, turn up the music;  it’s gonna be a LONG night. 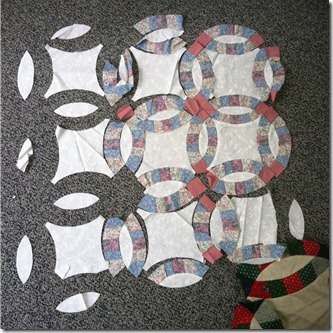 “I love deadlines. Especially the whooshing sound they make as they pass by.” – Douglas Adams

They say (revise that to IT IS SAID, ‘they’ will be dealt with in another post) that as you get older that time goes by more quickly. Maybe that is why I thought it was just the other day that I posted. Where does the time go, indeed. I just spent a wonderful Easter weekend with my family up in Connecticut. All of the little kids are still insisting on growing a foot between visits and losing teeth and getting cuter. Heck, one of them even got her drivers license!

But that is nothing on the feeling old thing that my daughter pulled on me on Tuesday last, when she had the audacity to turn a quarter century! 25. Amazing. She is a beautiful woman now, don’t you agree? She graduated last May and is still looking for full time work. The only jobs she’s ever left have been because she moved away from them, and even those she found hard to quit, because her boss’s would bend over backwards trying to keep her. She worked for me while in high school and I will honestly say that she was my second best employee. (It’s ok, she knows I favored her boyfriend, Ozzie.) She will do ANYTHING at this point. You won’t regret hiring her for almost anything, almost anywhere. ANYONE???)

Checked in on Dad on the way home from Connecticut. As you may know we have an odd relationship, but he is enjoyable to be around. Keep your thoughts flowing positively in his direction, as some of those spots have re-appeared on his lungs.

So, now that I have all this free time since I am not writing anything currently, you’d think I would have made headway in the studio, in any fashion, right? Wrong.

But, I DID open an ETSY shop. I am selling my photography. I have only two prints available at the moment, because I want to be able to order them, sign them and ship on demand, not have a large inventory. At least that is my idea for the moment. I am TOTALLY open to suggestions as to that thought, by the way. Part of that is probably my lack of confidence in what is considered ‘good’ by other people. The pictures I like are not always saleable. Or maybe that is merely the deep-seated procrastination in me.

I decided to just do it! I have been debating, plotting, thinking and ruminating over my photographs lately. I pull them up on PSE6 and play with them; I colorize, and age, and re-touch new and old images and generally have a grand time playing with them.

…but, it is time to motivate. Get moving in a direction that means something…I need to be more active in pursuing this goal; not forgetting the show deadline at PRAC every month, get down to the show, put art in the show..

…is it laziness or fear?…whichever…

What else….hmmm. Here, click on this link to my husband’s photo page. He went crazy at the New York International Auto Show last week, and has written a very good intro and his captions are amazing (even if you think he may be speaking in tongues)

They think a tornado touched down at the corner of Temple and Puddledock this evening…far better than last year this time, when it shredded part of our roof at work, while i was hard at work under it …(a half mile from tonight’s action…it may be time to get out of DODGE!)

OK. Think we are all caught up.

We are off to Florida on Friday for a ten day vacation…. Beach, sand, sun, seashells…. Bring it on!